I actually wasn’t planning to attend the winter NAMM Show in Anaheim, California this year. But when Dubreq’s John Simpson needed some help demonstrating the new Stylophone Gen R-8 at the convention, I couldn’t resist volunteering to be one of the first people to get my hands on the latest member of the Stylophone instrument family. 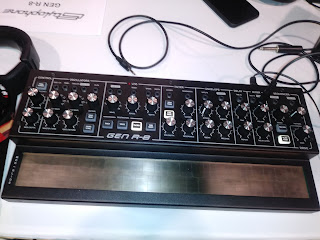 I started my Wednesday morning with a long drive to the Denver airport from my home in the suburbs on the opposite side of town. I made it to my gate right as boarding began. I enjoyed some of the 2.5 hour flight visiting with Nalani, a professional vocalist and bass player. She was scheduled to perform with a musician from Nashville late Wednesday night at the Marriott hotel on the convention center campus. I told her I would catch her performance if I could stay up late enough. (I couldn’t. I’m tired!) 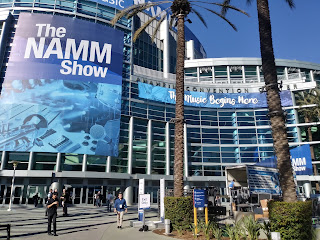 I dropped off my luggage  at my hotel and headed straight for the Anaheim Convention Center where I met John and his wife, Marcella Kavanagh. While they set up their trade show booth, I gave myself a crash course in operating the Gen R-8. (I had read the owner’s manual at home.) They have two prototype units that were finished only a few days ago. Both are almost fully operational but have a few features that aren’t quite ready to go. With John’s help, I learned how to use most of the instrument’s features and we figured out how to best demonstrate some of the deeper capabilities such as CV patching and the really cool 16-step  sequencer. 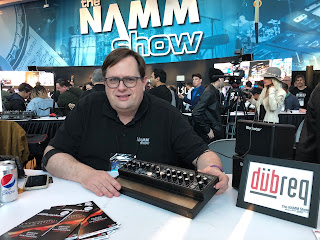 And with that bit of training, we made our way to the media preview event where I demonstrated the the Gen R-8 for several music technology bloggers from the US and Europe. It was quite a lot of fun, and a real challenge to speak about an instrument I just played for the first time today. I have conducted dozens of interviews with all kinds of celebrities during my long career as a TV producer. I found it a lot more difficult to be the interviewee. (I hope I didn’t babble too much.)

John, Marcella and I finished the day with a great meal and conversation. Now it’s time to get a good night’s rest. Tomorrow the trade show will be open and, I am hoping, will be very busy at booth #10306.