The Delightful (and peculiar) Stylophone 350S

I took a rather long break from posting to the Stylophone Museum. I've been in the process of selling one home and moving to another. A lot of my musical instruments got put away in cardboard boxes. Now I'm back with possibly my favorite Stylophone, the somewhat rare model 350S. 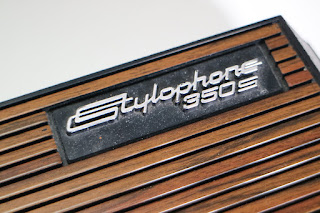 Dubreq released this instrument around 1977 and it seems their intention was to promote the 350S as a more legitimate musical instrument that could be used in a band. Some other websites and blogs claim that only a few thousand of these instruments were ever sold. (By the way, I try my best to share mostly my own opinion and direct knowledge about Stylophones, rather than just repeating information from other websites. There are lots of great resources about Stylophones on the web. You should check them out for yourself.) 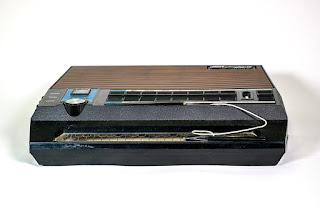 The first thing you will notice about the 350S is its size. With dimensions of about 12.5"x3.5"x11.5" it dwarfs every other previous Stylophone. It's that big for a few reasons. It features 44 keys. That's almost 4 octaves or half the range of a piano. It also has two styli (more on that later.) And it sports a bigger internal speaker than the standard models. I really like the wider range of notes.  It comes in handy when playing melodies that span several octaves. 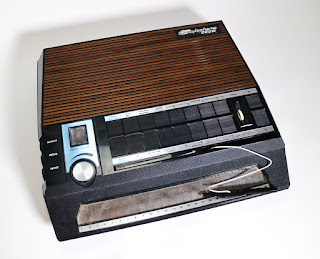 The 350S has a fairly wide range of possible timbres, too. A set of six 3-way toggle switches allow you to dial up 80 possible timbres using an additive synthesis scheme somewhat similar to a Hammond tonewheel organ. You can choose various combinations of woodwind, brass and string sounds at 16', 8', 4' or 2'. (This numbering system corresponds with the pipe lengths of a pipe organ. 8' is kind of the fundamental tone. 16' is a subharmonic an octave lower. 4' and 2' are harmonics one and two octaves higher.) Playing multiple harmonics at the same time produce a richer, more complex timbre. The woodwind sound is available in all four lengths. The brass is available in 16' and 8'. The strings sound is available at 4' and 2'. You can select 1 to 4 of these voices that play solo or in unison as one registration. Unlike a Hammond, though, you can't adjust the volume balance between the different harmonics. Warning! If all four toggle switches are in the center position, you get no sound.  I've panicked more than once when the switches were set this way and I couldn't coax out a sound. 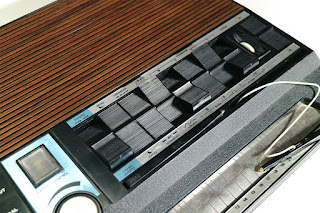 The designations of "woodwind," "brass" and "strings" are very approximate, much like the registration names of different pipe organ sounds. I haven't hooked my 350S to an oscilloscope to see exactly what the waveforms are, but generally a square wave would be considered a woodwind sound, a sawtooth wave would be a brass sound, and a triangle wave would be a string sound. So I think that is what is going on here.

I sometimes joke that the 350S has 80 possible sounds that all sound alike.  That's not quite true, but the differences between sound combinations are fairly subtle. Fortunately, you can further manipulate those 80 sounds with 0 to 80 combinations of effects settings for a total of  6,480 possible patches (80 timbres x 80 effects + 80 timbres with no effects.)

Effects include fast and slow vibrato, fast and slow reiteration, long and short decay, and the option to use a photo control device to manipulate overall volume, vibrato volume, or a "waa waa" filter by moving your left hand above the instrument, allowing more or less light to hit the sensor. If you're playing in a room with either low light or on stage with disco balls and sweeping spotlights, the photo control isn't very practical. So, you can plug in an expression pedal and operate the same controls with your foot. To get the full range with a foot pedal, though, it is best to cover the photo sensor with something opaque, because the expression pedal adds to the photo sensor value, rather than completely replacing its function. 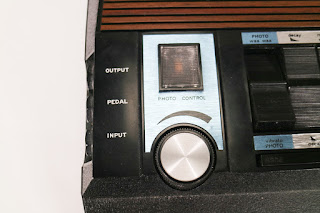 The vibrato effect probably needs no explanation, so I will skip it. The decay effect approximates the volume envelope of a struck or plucked instrument. A played note will fade to silence even if you are still holding the stylus against the keyboard.

The reiteration effect takes some explaining. Reiteration is a percussion effect that appeared on some electric organs in the 1960s and 70s. It also appeared in the settings of some theater pipe organs that could play actual percussion instruments in addition to the pipes. Basically, when you held down a key or keys, the organ would rapidly turn the sound on and off as if you were rapidly playing the same key(s) over and over again. (In theater organs, it would make the mallets actually strike the percussion instruments over and over again.) In electric organs, it's an effect used to imitate instruments like banjo strums and xylophones. Pete Townshend used a very similar effect on a Lowrey organ for The Who's hit song "Baba O'Riley." The Stylophone 350S employees reiteration with the left-most stylus. While in reiteration mode, you can hold the left stylus on any key to get that effect. If you continue to use the right-most stylus to play a melody, the reiteration sound will mute as long as both styli are in contact with the keyboard, and you will only hear the normal sound of the right stylus. By rapidly alternating between styli, it almost sounds as if you can play a lead line and a backing strumming sound at the same time. 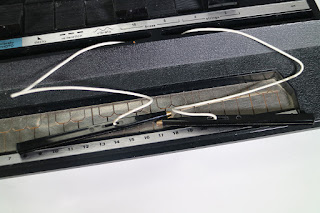 On the side panel where you can plug in an expression pedal, there are also audio input and output jacks. The input jack allows another electric instrument's audio signal to be mixed with the 350S audio output. The output jack allows you to turn off the internal speaker and send to sound output to an external amplifier or recording device. There's also a tuning wheel so that you can fine-tune the 350s and match other instruments in a band. 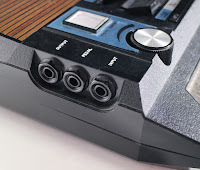 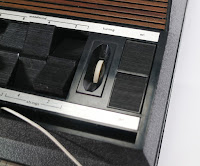 Finally, I want to tell you about the batteries. The Stylophone 350S is designed to be powered by two PP9 batteries, which are huge 9-volt batteries that are rarely available anymore in the United States.

Since these batteries are hard to find and rather expensive, I power my instrument with PP3 batteries, which are the more familiar, small 9-volt batteries that you used to get for free with your battery club card at Radio Shack. The space between the terminals is different between PP3 and PP9 batteries, so I had to rig and adapter for each of them. I bought some battery terminal plugs of each kind, and connected them together. With my first attempt, I got the polarity wrong and within a few seconds the batteries got very hot. Fortunately, I didn't fry the instrument. After swapping the wires, the instrument powered right up and worked just fine. 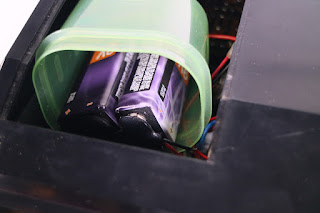 I picked up my 350S, used, from an eBay seller in the UK a few years ago.  I can't recall the exact cost, but I think it was somewhere around $150 including shipping. The box was in bad shape and the 350S had some minor cosmetic issues, but sounded great. I've seen eBay listings for allegedly NOS (new old stock) for about $220 and up. One problem with buying these instruments sight-unseen is that the seller often does not have the PP9 batteries and cannot test their 350S to verify that it still works.

If you want to hear the 350S in its full glory, check out the really cool Russian rock band called Gromyka. They used the 350S as their primary keyboard instrument.

If you are a Stylophone fan and you can get one, I highly recommend this instrument. I really enjoy playing the 350S. It has many of the quirky charms of the original Stylophone, but it is a richer-sounding instrument that is a giant leap closer to the sound and functionality of an electric organ. Keep in mind, though, that any electronic device this old can fail at any moment. Repairing one can be either costly or impossible. Every time I play my 350S, I think about this and appreciate it even more.