Introduced in 2007, the Stylophone S1 is a digital recreation of the original pocket electronic organ. With a nearly identical cabinet design, the S1 captures the quirky charm of its predecessor, with a few new features. 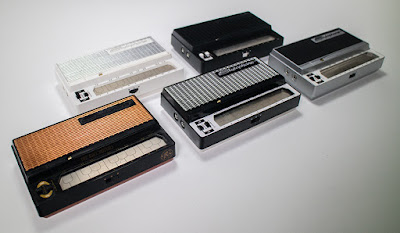 (FYI -- You won't find "S1" anywhere on the instrument or packaging. The nickname came into common use after dubreq announced the Stylophone S2 portable synthesizer in late 2012.)

The first iteration of the new generation Stylophone sported a black and white cabinet, chrome grille and white frame around the keyboard. Several other color schemes followed. The Stylophone Museum has six variations of the S1: 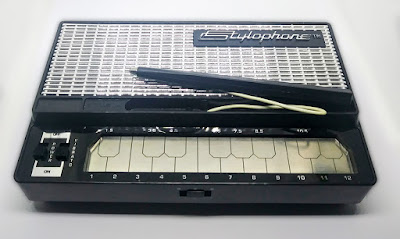 The Raconteurs Tour Edition was sold from the merchandise stands at Raconteurs concerts during their tour in support of their second album "Consolers of the Lonely." It was also available through the Third Man Records website. The custom packaging included note-number charts for two songs from the album. The band held a music video contest, inviting fans to submit recordings of themselves playing Raconteurs songs on their collectible Stylophones. 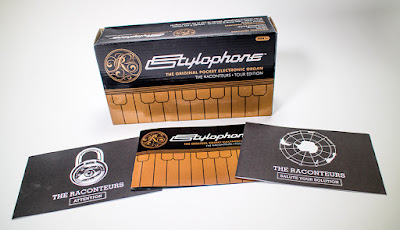 The Studio Black Edition was available exclusively through a couple of online retailers: 100 Milligrams in Hong Kong and Dance Music Record in Japan.

Regardless of color scheme, all Stylophone S1 instruments have the same sounds and functions. A three-position switch on the front edge selects between three available timbres. Setting the switch to the center position produces a bright organ-like timbre very similar to the original analog Stylophone. At the right position, the timbre is nearly identical but one octave higher. At the left position, the timbre is more subdued and dull, better suited as a background sound than for melodies. 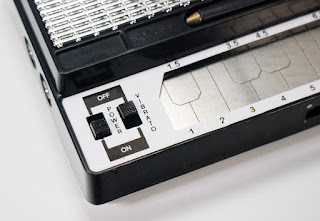 Other S1 features include a volume control (sorely lacking from the first few iterations of the original analog instrument) a vibrato switch, a headphones/line out jack, and a fine tuning knob on the bottom of the cabinet. An MP3 input jack allows one to play along with an external sound source and have the resulting mix play through the Stylophone's speaker or headphone output. This feature also allows the instrument to be used as a wired amplified speaker for an MP3 player or smart phone. The sound quality is definitely lo-fi, but it will do in a pinch.  For recording or playing in a band, connect the headphone jack to your mixer or an external amp. It sounds cool when processed by guitar effects pedals, too.

The S1 is powered with three AA batteries. There isn't a jack for an AC power supply.

Overall, the S1 works well and is fun to play. but it does have some minor flaws. My first Studio Black Edition stopped working after a short while. The dealer replaced it, but if I recall correctly, the replacement broke, too. (This special edition is no longer available, so the one I have now stays in the box, mostly unplayed. Other S1 versions don't seem to have the same quality control issue.) The vibrato effect sounds great from an S1 speaker but is rather faint or even absent from the headphone jack. The frame around the keyboard that is imprinted with note numbers is a glossy paper adhesive label on most varieties of the S1, rather than the sturdy plastic panel used on the original Stylophone. This label can end up with creases or worse. I attempted to clean the metal keyboard surface on an S1 with a mild solvent cleaner (e.g. Windex) and had the adhesive label absorb the liquid and self-destruct. Yikes!

If you don't have a Stylophone S1 yet, you really should get one.  They are fun to play and serve as convenient, portable composition tools for writing songs on the go.