In the mid 1970s, EMI Music Publishing issued a two-volume set of music books for Dubreq Ltd. called Super Pops for the Rolf Harris Stylophone & 350s. The exact publishing date is a bit of a puzzle.  Both books have a 1974 copyright on the first page, but individual songs have copyright notices as late as 1975 in Book 1 and 1976 in Book 2. I picked up copies of them on eBay from a seller in the UK a few years ago. The two books feature a combined total of 23 contemporary pop, standard and traditional songs made popular by recording artists like Neil Diamond, Pilot, Jimmy Osmond, Terry Jacks, Barbra Streisand, Elvis Presley, and Johnny Mathis.  Although celebrity spokesperson Rolf Harris* is on both covers, his own music doesn't appear in either volume. 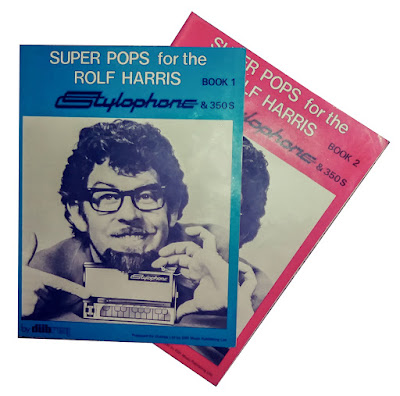 Each song gets a "fake book" style arrangement with standard notation for the melody on a treble staff, plus lyrics and chord names. Standard Stylophone note numbers appear along the top of the staff and 350s note numbers appear below the lyrics. The numbers correspond to labels along the keyboards of many Stylophones. The idea is to make the music more accessible to people who don't know how to read standard music notation.  It's sort of the musical equivalent of paint-by-numbers. 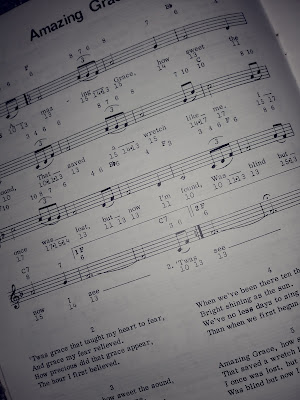 In the numbering system, the white keys are whole numbers such as 1, 2, 3, and the black keys are labeled with compound numbers 1½, 3½, 4½, etc. While most Stylophone models have these numbers along the keyboard, some of the earlier models are labeled with the musical letter names A, B, C, D, E, F, G along the lower edge of what would be the white keys on a piano. The keys that correspond to a piano's black keys have two labels along the top edge, such as A#•B♭, because each of these keys can have either name depending on the key signature of the music being played. A thin, black plastic overlay  with note numbers (shown on a bass Stylophone in the photos below) could be placed over the letter names. 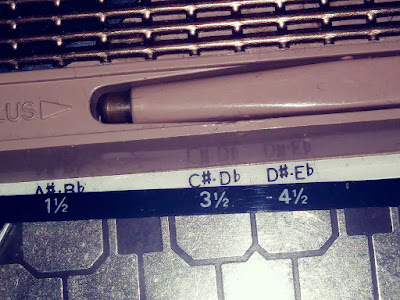 Frankly, as someone who knows how to read music notation, I find this alternative numbering system rather cumbersome to use and awfully difficult to follow on the sheet music pages. You can't really read the numbers in the music book and on the keyboard at the same time. And Stylophones are quite difficult to play accurately without carefully watching where you place the tip of the stylus. For people who do need these labels, I suppose they are a nice feature. Personally, I think the letter names make more sense than the number labels. A beginning musician would be wise to learn these letter note names before moving on to another instrument such as a piano or organ, but the numbers - and especially the compound numbers - don't really transfer directly to any other instrument. 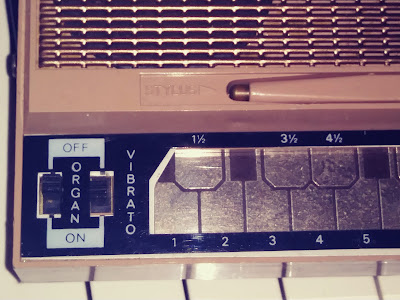 On the early models, the letters or numbers were imprinted on a thin but sturdy white plastic panel that surrounded the keyboard and switches. The digital S1 re-released instruments that came out decades later substituted the plastic labels with adhesive-backed, glossy paper stickers.  Unfortunately, the adhesive could dry and make the sticker loosen, and cleaning the metal keyboard surface with any sort of a liquid cleaning chemical could ruin the sticker. I've ruined a couple of them myself.

In case you're wondering, here are the songs featured in the two Super Pops song books. It's quite an eclectic repertoire. My personal favorite is Telstar, which goes well with the original Stylophone timbre with the vibrato switch engaged. I've linked some of the songs to their corresponding YouTube videos, usually giving preference to UK performers in cases where songs were hits by more than one artist.

*Please note: Some packaging photos in the Stylophone Museum may include images of former Stylophone celebrity spokesman Rolf Harris.  Mr. Harris, as you may know, was involved in a criminal scandal a few years ago and has completed a prison sentence. The inclusion of his image in this blog is for historical purposes regarding the Stylophone in popular culture and does not constitute and endorsement of Mr. Harris by the owner of this blog. Mr. Harris does not endorse this blog either.