It has been awhile since I've posted an item from the Stylophone museum. This time, I have an interesting box.

During the first incarnation of the Dubreq company, their celebrity spokesperson for the Stylophone in Germany was a jazz musician and TV and radio personality named William "Bill" McReery Ramsey. 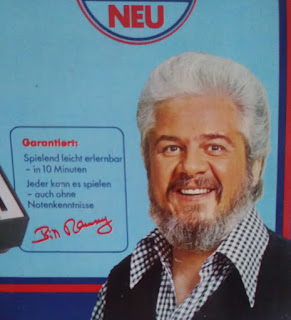 Bill Ramsey was actually born in Cincinnati, Ohio, USA, but he became a famous musical entertainer in Germany while serving at a US Armed Forces Network radio station in Frankfurt in the early 1950s. You can read his bio on his official website at www.ramsey.de.

Bill appeared on at least one version of the Stylophone packaging.  The box in my collection is not in very good shape, but I hope you enjoy seeing these photos. 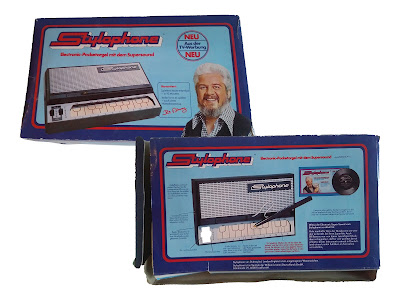 My knowledge of German is both limited and a bit rusty, but I think the text below very loosely translates to something like "Guaranteed: You can be playing simple tunes in 10 minutes. Everyone can play, even if you don't know how to read sheet music." 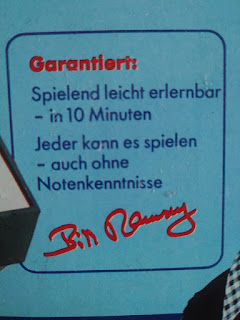 When I bought this box (which happened to have a Stylophone in it) I didn't get a copy of the vinyl record.  So, I don't know if Bill replaces the voice of Rolf Harris. I did, however, get the instruction book that included Stylophone sheet music for some German folk tunes.  Last year the folks at Dubreq gave me permission to post the sheet music on-line, but I didn't get around to it until now.  I've enlarged it to fit 8.5x11 paper. You can view and download the .pdf at this link. If the link doesn't work for you, send me a note and I'll get you a copy.